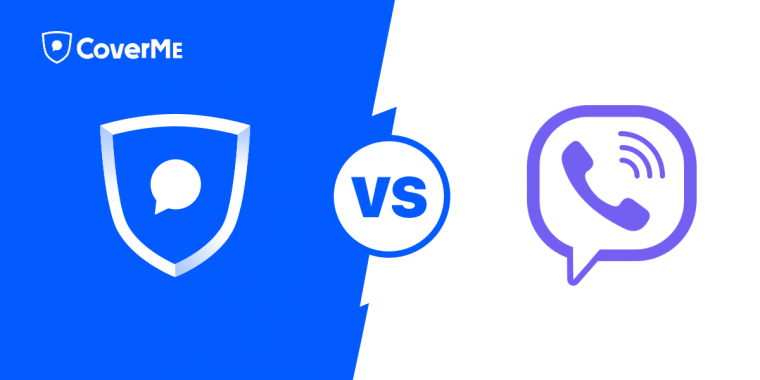 It seems like almost daily that we read new headlines about big data companies like Facebook or Twitter being hacked, and we all know a politician or celebrity who have had their private photos leaked online. Meanwhile, other companies like WhatsApp frequently share your phone number, location, and payment information with their parent company Facebook, and other companies simply sell your data to advertisers.

It is no wonder, in this age of information unsafety, that so many people are turning to encrypted messaging apps to protect their privacy and boost their security. Two popular options are Viber and CoverMe. But which is the best app for encrypted messaging? In this article, we review the pros and cons of each.

What Is Viber App?

Viber is advertised as a way to make free secure calls to anyone, wherever they are located in the world. It works on both iOS and Android and offers full-featured group messaging across multiple platforms like PC, mobile, and tablet. Also, like Signal and Discord, Viber uses end-to-end encryption, meaning that your messages cannot be spied on by third parties and your data remains secure.

Users on Viber can create group chats that contain up to 250 people and make calls with up to 20 people at once, all over a secure VoIP network. With over one million users, Viber is popular because it is completely free and doesn’t require a username or password to set up. Instead, it uses your unique phone number to identify users. This makes it impossible to disguise your identity or hide behind a screen name.

While Viber has a premium service that lets you make cellular calls, their regular WiFi-dependant service is free. You can also do all the regular messaging+ features like sent stickers, videos, and emojis.

What Is CoverMe App?

CoverMe is a free-to-download second number app available on the App Store and Google Play, and it’s the best way to remain safe online. In fact, CoverMe is a one-stop security app that offers users a full suite of protection features like end-to-end encrypted messages, a personal vault, and self-destructing messages.

Importantly, CoverMe also prioritizes anonymity and privacy, unlike many other messaging apps like WhatsApp or Viber, since it allows you to set up as many numbers as you want that are local to almost any location in the world without entering your personal details. It doesn’t ask you for your own phone number, and it never stores your data in a cloud network, leaving it vulnerable to hacking.

When you look at features alone, Viber might seem to come out on top:

But some of the crucial differences between CoverMe and Viber have to do with how CoverMe protects your information. For example, free cross-platform capabilities might sound snazzy, but they leave users open to considerable security flaws. Here are some important differences between the two secure messaging apps.

Viber has only limited capability when it comes to self-destructing messages. But with CoverMe, you have a fully customizable set of options to have your messages deleted as soon as they are opened or after a set time. This means you can set specific timeframes on sensitive documents, which is more secure.

CoverMe deliberately avoids multiple device capabilities because it can introduce security flaws. However, if you are less concerned about security, then Viber has one-tap transfer of calls between mobile and desktop. Ultimately, it is a tradeoff between security and convenience.

Registering with a Phone Number

With Viber, you have to register with a phone number and you cannot use the service to get alternative or second numbers, which are very useful for separating your business and personal life or for signing up to websites like Bumble and eBay, where you may not want to share your real details.

CoverMe also has a number of other features that aren’t included with Viber’s free service. For example, the CoverMe Circles feature lets you broadcast in group chats while still fully protected by the secure encryption. CoverMe also has an app disguise feature and an app lock feature. When you open the app and see the lock screen, it resembles a photo album, and you have to know exactly where to click to pull up the password input box.

Who Comes Out on Top?

Both Viber and CoverMe are solid choices when it comes to secure messaging. Both are far better than WhatsApp, Facebook Messenger, and SMS texting, which are either unencrypted or have major security flaws.

Viber claims to have over a million users, and it is certainly a good option for those looking for a free way to boost their security. However, its downfall is to limit its users to a single number that they have to use for registering, and to enable cross-platform support, which can leave unsuspecting users vulnerable to flaws. It’s convenient, though, and for some people that suffices.

If you value your security, CoverMe stands head and shoulders above the competition. It boasts more advanced security features than any other platform and dedicates its entire operation to your security and safety, even when it is not the most convenient. However, CoverMe makes up for supporting only a single platform by allowing users to get access to as many numbers as they want to operate – all highly encrypted and fully functional – which keeps them anonymous and highly flexible. For example, many users choose CoverMe to separate their work and personal life, something that Viber makes impossible.

Ultimately, we recommend CoverMe, and you can download it by following the link here.